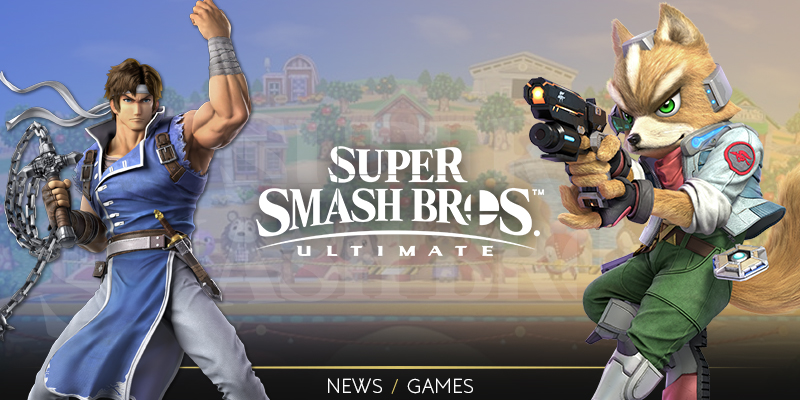 The 7th of December 2018 – a day the whole Super Smash Bros scene has been waiting for as it marks the worldwide release of the highly anticipated Super Smash Bros Ultimate for the Nintendo Switch.

With titles such as Melee, Brawl and Super Smash Bros 4, the competitive scene for the game has been incredibly strong and can look forward to Ultimate to continue this trend. With release, there are over 70 fighters and over 100 stages. The Super Smash Bros franchise has been an important one for Wolves eSports since we first picked up a group of players in September 2016. With

Benjamin “wusi” Baye, there is still one of these players around!

Going into Ultimate, we hope that our three German players “wusi”, “Eddy”, and “Frieddo” will be able to leave their mark on the national scene and maybe even Europe. All three will attend the AGON-Serie | The Council, one of the first German offline events for the new game on Dec 15 – Dec 16.

Going forward and into 2019, we strongly believe that our current roster is strong enough to be a relevant force in the German scene and it will be interesting to see which players stick to their former mains or pick up a new character.

From May 18th – May 21st the 2018 edition of Smash Valley took place in Vallendar, Germany.

With plenty of tournaments in different games and a great amount of other activities and possibilites it is one of the bigger Smash events taking place in Germany and featured 102 players this year. With

Friedrich “Frieddo” Meißner, three of those were Wolves meaning our whole squad was fighting for the top spots.

WiiU Singles
In the Singles competition, Frieddo unfortunately did not make it out of the pools while both Eddy and wusi managed to get through, although both had to take on the route into the lower bracket. Eddy faced

Vuralol there and was handed a loss which put him out of that tournament on a 25th place. The last remaining Wolves player wusi went on a streak as he breezed through

Schligger in the lower bracket quarter final where he ultimately lost 1-3 and placed 5th in Singles.

WiiU Doubles
All three Wolves participated and with Eddy/wusi, we fielded a Wolves only team while Frieddo partnered up with

Tales. Both teams recieved a BYE for Round 1 and managed to win their Round 2 match. Round 3 is where things changed and Frieddo/Tales dropped into the lower bracket while Eddy/wusi won their match. Frieddo and Tales won another match in the lower bracket before being eliminated in 13th place. In their winner bracket quarter finals, Eddy/wusi faced the french duo

Homiko/Elexiao, dropped into the lower bracket and lost their next match there, placing 9th in the end.

Smash Brawl
Eddy and wusi tried their luck in Brawl and met each other in the winner bracket final, where wusi had the upper hand and sent his team mate into the lower bracket. Eddy however made it back to the grand final to make it a Wolves vs. Wolves matchup. In the end, wusi reigned supreme once again and took first place.

Dragonball FighterZ
Wusi was the only Wolves player participating and managed to fight his way into the grand final where he unfortunately lost, meaning he ends DBFZ in 2nd place.

Melee Singles
The lone wolf in this competition was Frieddo, who managed to get through the pools stage but lost the next two games in the brackets and placed 13th in the end.

Overall, it was a decent weekend for Wolves eSports and we’re happy with the results. While there are things to improve on, we can’t wait for the next event!
#GoWolves

We have to say farewell to three players that have been with us since September last year and all there is to say from our side is “Thank you!“. Thank you for staying with us for that long, thank you for being a part of Wolves and being with us on our journey. It was a pleasure to have you guys and we sincerely wish you all the best for your future, wherever it may take you.

As a result, we are left with just one player for now and that is

Benjamin “wusi” Baye. We’re looking to rebuild the team around him and are open to applications from players all over Europe. If you are interested and meet the following criteria, please contact us on twitter @wolves_esports:

With the Super Smash Bros year coming to an end we think it is time to recap what has happened since we joined the scene.

During their first event under the banner of Wolves eSports our players achieved a 4th and 5th place in solos while placing 2nd in doubles. With a start like that we surely hoped that the results would keep coming in and they did. Their second event saw another second place in doubles and a good 3rd, 7th and 13th place finish in the 1v1 bracket. Things were meant to look even better after that as Benjamin “wusi” Baye went on a tear for the next three tournaments, winning them all. First of was the Munich Smash Gaming 6, followed by a win at PaderSmash #4 and finally his 3rd in a row at Salt Smash City #9. The same weekend David “Yoh” P. placed 9th at Streetpass Essen CF.

Now that 2016 is coming to an end and many people already have their New Year’s resolution set up there is not more to say than that we are proud of the achieved results and hope the players can keep up their great performances in 2017 which hopefully is going to be the year of Wolves!

The event featured a 1v1 tournament with 96 competitors and a 2v2 bracket with 48 duos fighting their way to the top. Unfortunately, Jaytec was not able to advance in the tournament and was quickly eliminated.
Both wusi and Kunai went out in Round 4 and made their through the lower bracket to secure a  great 4th and 5th place finish for themselves in their first appearance as a player of Wolves eSports. On their way to do so they beat players from Stofftiere Online and Team Prismatic.

The next big event for the team will be the AGON November (11-13th Nov) organised and hosted by Kunai. Surely, we hope to achieve similar results, or even better, during this event. We are pretty happy with the performance and hope it is an indicator of where the journey of Smash here at Wolves can go.

By Andre | News, Smash | No Comments

Today Wolves eSports announces a reset of the project alongside a new team in a game that we premier in – Super Smash Bros.

In the recent weeks we got hit by a series of unfortunate events. Rainbow Six:Siege failed to qualify for the ESL Pro League and disbanded, our German CSGO team failed qualification for the 2nd Division of the 99Damage Liga and later on decided that the rebuild teams wants to go another route. Crossfire and SKILL also disbanded and left the project.

And now the happy news: Wolves eSports wanders into the Super Smash Bros scene with 4 players from Germany. Super Smash Bros is a game that is mainly played on offline events and started to get our attention lately. With all the things that have happened we decided to give the game a chance and hope that we’ll be able to grow alongside the still small German community in Smash compared to other regions. With Davide “Kunai KazeKun” Boccarossa being involved in the scene a lot as a player and organiser we hope Wolves eSports can leave its mark in the next months.

“We are grateful for the chance to represent Wolves eSports within the competitive Smash scene and will work hard to unleash our full potential. We hope to be able to achieve decent results in the upcoming events and tournaments to continue our recent form. Again, thanks to Wolves eSports for the chance and we are looking forward to a great partnership!”

Apart from that Wolves eSports is still looking for teams in Counterstrike:Global Offensive, Overwatch, Rocket League, League of Legends and DotA2 just to name a few. If you are interested please email us at patrick@wolves-esports.com or andre@wolves-esports.com