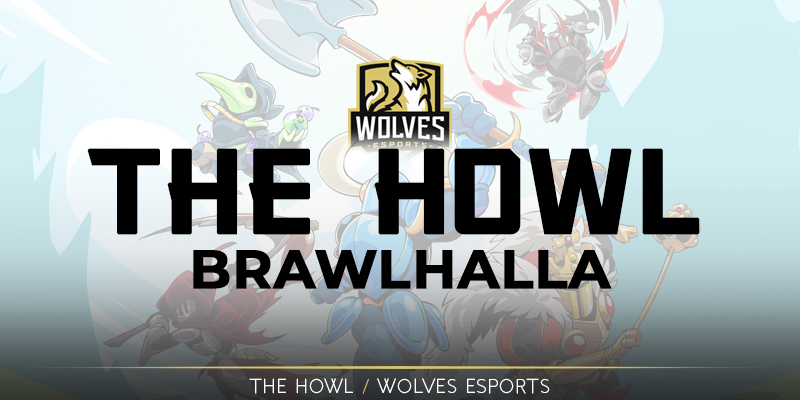 Our interview series is back, meaning “The Howl” is back!
You can expect quite a few of these throughout the first half of the year and we are kicking things off with Brawlhalla! We asked all of our players some questions regarding themselves, Brawlhalla and a few unrelated questions, here are their answers:

Hello guys! Let us start with something pretty simple. Go ahead and quickly introduce yourselves!

Pavelski: People know me as Pavel outside of Brawlhalla but ingame my nick is Pavelski and I’m 19 years old.
TheNinja729: My name is Daniel aka TheNinja729. I’m 20 years old and went competitive in Brawlhalla in 2018.
Solarson: My name is Ivan, I go by the nickname “Solarson”, I’m from Portugal and I’m 20 years old.
KiXe: I’m a 17 year old “for fun” competitive player fighting game enthusiast.
ErTitoooo: Hello, I’m a spanish Brawlhalla player called ErTito… and I’ve been playing tournaments for around two years.

Okay, thanks! We all know that you are playing Brawlhalla, but what was the first videogame you ever played?

Talking about Brawlhalla – is there any reason why you chose Brawlhalla over other fighting games?

Pavelski: There is no particular reason why I chose Brawlhalla other than one of my close friends suggesting the game and me having fun with it for a long time.
TheNinja729: It was free to play on Steam and other fighting games usually cost money so I chose the cheaper option.
Solarson: I like the simplicity of Brawlhalla compared to other fighting games. Its definitely not a hard game by any means but it does have its perks. Personally If I had to give you my main reason I’d say its due to the support that 2v2s has in Brawlhalla. I’ve always been a fan of co-op and team games in general so having a fighting game that combines both is great.
KiXe: I’ve played Smash before but far far away from anything competitive. I always enjoyed playing it together with my friends and family.
It was in fact my brother who had this game on his laptop and said it was similar to smash and I had to play it with him. I didn’t play it everyday at that time, it was just a party game we had some fun with. It wasn’t until next summer where I managed to convince my friends to start playing the game. And since I am a bad loser I started practising.
ErTitoooo: Well, I never had an interest for fighting games since they are all played on controller and when I found out you could play Brawlhalla with a keyboard I got really into it.

What are some other games you play apart from Brawlhalla?

Pavelski: I dont play many games outside Brawlhalla but I used to play League of Legends, CS:GO and anything else which I find fun in particular.
TheNinja729: osu! to train reactions and because I was competitive in it before I went pro in Brawlhalla.
Solarson: Outside of Brawlhalla I mainly play Rocket League and Tekken 6/7. I’ve always played Tekken since a young age so I’ve grown to love it. Unfortunately it is better played on PC due to the delay that console has and because my PC isn’t the best I usually don’t play it as much (in regards to Tekken 7). When it comes to Tekken 6 I just play it from time to time when I’m in the mood to grind some records for Scenario Campaign; its similar to a Speedrun type of game-mode in Tekken 6 but the objective is to reach the highest score, combining both knowledge of how the score system works and being fast, I’m ranked #1 for both Single Player and co-op. When it comes to Rocket League I just play it to chill, I don’t take the game seriously at all, but its fun so I hop in for some games from time to time.
KiXe: I enjoy lots of games. But at the moment I probably only play COD other than Brawlhalla. I want to enjoy singleplayer story games but I always end up not playing it.
ErTitoooo: The other games I play are League of Legends and Apex Legends. These are the games I play when I get bored of Brawlhalla and want to play something else.

Let’s talk about Brawlhalla now for a bit. We are used to seeing you in big tournaments. Is there any routine you do or follow when preparing for huge events?

Pavelski: For tournaments in Brawlhalla I always wake up at least 2 hours before the tournaments start so I can warm up properly.
TheNinja729: I always play 30 minutes of osu! to warm up my hands, fingers, reactions and my sight, then 45 minutes of Brawlhalla ranked for every tournament.
Solarson: For me there’s usually not much preparation, it depends on whether its 1v1s or 2v2s. If it’s 1v1s I try to play ranked about 1 week before the tournament to make sure I’m warmed-up for it and if i’s 2v2s, it’s basically the same thing but in 2v2s. Not only do I play ranked but I also try to play custom games and create team combos with my partner.
KiXe: I don’t think I have any special routines for huge events other than just being aware of what I eat and drink. I don’t drink caffeine or sugary drinks when I am gonna play competitive as it gives me bad side effects.
ErTitoooo: I dont do anything special, I see tournament days as any other day.

Looking ahead, what are your wishes for competitive Brawlhalla in the future and for the game in general?

Pavelski: My wish for the future of competitive Brawlhalla is that the devs keep doing what they’re doing and for the game to keep growing as it is right now.
TheNinja729: The biggest wish I have is to have offline events again because it’s such a different game when you play it in person.
Solarson: Brawlhalla is in desperate need of some ranked changes, not only from a competitive standpoint but also from a casuals perspective. I also wish Brawlhalla would have more communication with the players when it comes to balancing and sponsorships. Apart from that, it’d be nice to see an in-game update to the main menu which would provide a direct link to the Brawlhalla Twitch channel whenever there’s a live event, similar to how Rocket League does it.
KiXe: Mainly personal wishes. I would definitely try to go for the podiums and from there to number one.
ErTitoooo: My wish for the future of competitive Brawlhalla is that the game keeps growing and they keep increasing pricepools. Also I would love if they gave more incentives to play ranked, like a new rank or something.

There are plenty of characters to choose from in the game – what are your favourites and who is your most hated character?

Outside of playing games, what are some of your hobbies and what are you guys doing in your free time?

Pavelski: In my free time I’m mostly in voice chat with my friends or exercising in real life. Sometimes I watch series as well but my biggest hobby is probably exercising.
TheNinja729: Right now I’m studying media culture which consumes a lot of time. Besides that I used to travel a lot and go to events.
Solarson: Usually, when I’m not playing Brawlhalla I just watch Youtube, hop in some streams on Twitch, talk to my friends or study for university.
KiXe: I enjoy programming and just learn new things in general, especially things that have to do with computers. And being with friends, gf and stuff like that of course.
ErTitoooo: In my free time I like to play videogames and play paddle tennis.

Most of us consume a lot more content on streaming websites during this pandemic so we’d like to know who your favourite streamers are.

Pavelski: I dont really watch streams that often…
TheNinja729: PavelskiBH <3
Solarson: I watch a great variety of streams for different games, I don’t think I could say I have a favorite streamer but if I had to pick someone I’d say Boomie for the Brawlhalla section, he’s entertaining on stream and I always like to hear what he has to say about balance or the game in general since I respect his opinion.
KiXe: I don’t actually watch that many streams, but when I do it’s The_Floater and xQc. But nothing stand a chance against EphiBL streams. I just love his personality and how good he is at explaining stuff. And he is also a big reason why I am in this place today.
ErTitoooo: My favourite streamer is Crockie, I’ve been subbed to him for a year now.

Last question: What is your “feel good” food after you had a rough day or tournament?

Pavelski: My feel good food after a rough day or a tournament would most likely be rice, a banana shake and some salad.
TheNinja729: Lollipops because i can aggressively bite on them.
Solarson: I’d have to go with Spaghetti with tuna, it’s delicious.
KiXe: Nothing beats a good steak.
ErTitoooo: Any type of pasta, as it’s my favourite food.

We are done, thank you for answering our questions! If you want, this is the time for final thoughts!

KiXe: Shout out to Sætre for being a good loser. 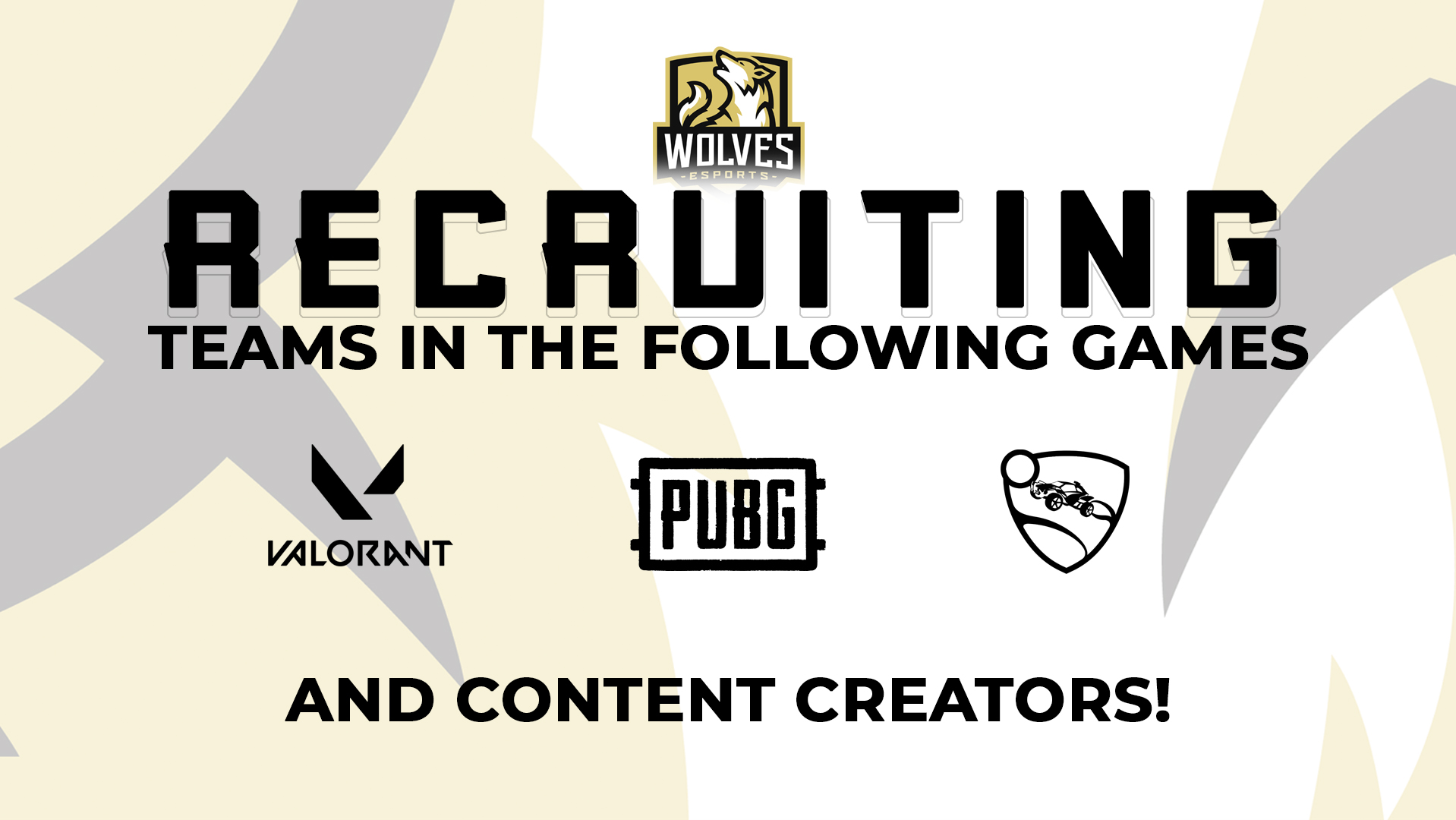 Wolves Recruiting Pt.2
Wolves Esports is a German-based esports organisation that strives to be a top contender in the German and European scene in the near future.